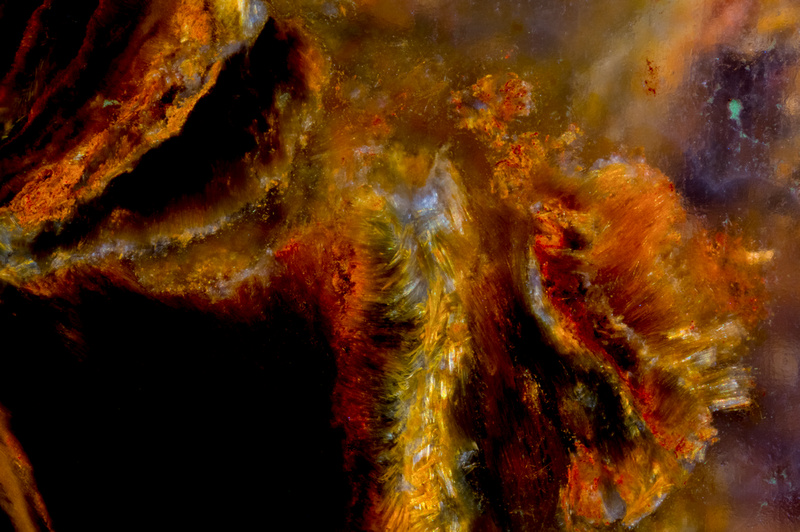 Stone Spirit #163Stone Spirit #163 explores the exquisite beauty of the micro world and the common design elements found throughout creation. Stone Spirits is an intimate expression of Anima Mundi or Soul of the World as well as the ancient stone arts of Suseiki and Gongshi. Photography by Dennis W. Felty Northstar Gallery

This proposal explores the presentation of fine art photography as NFTs (Non-Fungible Tokens) in gallery or museum venues. The artist's Stone Spirits Series or Anima Mundi are proposed as content for an exhibit comprised of 20 to 25 images. The show's images would be presented digitally on a series of wall mounted Sony high resolution smart TVs. Each screen would be framed in a manner that reflects a traditional museum presentation. The Sony screens have a high quality non-reflective glass that is similar to non-glare museum glass. The digital files are uploaded to a directory on Google Drive and then displayed individually on the Sony smart TV screen.

One main Sony screen might have a dimension of 85" and the rest of around 65". Some screens would present a permanent image while others may change every hour or over an a defined time period. Some images may change incrementally in pallet and content over the duration of the exhibit creating a dynamic quality to the show.

The images of Stone Spirits are micro photographs made with the use of a high powered microscope and explore the exquisite beauty, form, shape and color of this micro world. The stone subjects are small crystalline agate structures formed over 30 million years ago. Each stone holds the entirety of the universe and beckons us to consider the unity of creation. The exquisite shapes, forms and colors captured in Stone Spirits call to our collective unconscious with a vast array of animals, angels, symbols, demons, monsters, birds and other creatures. It would be possible to do an entire show on images of a single stone that might be less than 1/2" in diameter.

The photographic process uses a complex series of stacked focus images with each final image being comprised of from 40 to 500 individual exposures that are combined into a single image. The artist has worked on this technical process and the creation of the Stone Spirit images for over 15 years.

Below is an example of an installation in a home setting that reflects the vision of this proposal. 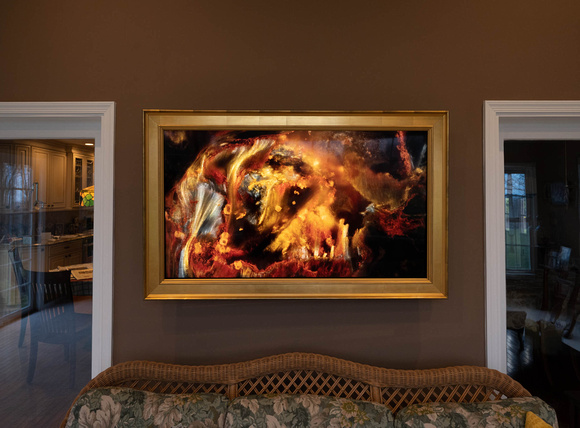 Each image would be minted as an NFT to establish originality and authenticity. As a component of this premier NFT formated exhibit the NFTs would be made available for purchase on Open Sea or other NFT Marketplace.

If the gallery or museum is a non-profit 501(c3) there would be an option for the proceeds from the NFT purchases, less installation costs, to go to the gallery or museum. In this option the NFT minting would establish the NFT images as limited edition series by the artist. The artist would reserve the right to mint subsequent NFTs as part of the series. Individuals who purchase the NFT might also receive a traditional print signed by the artists that would be referenced in the NFT.

Such an exhibit might partner with a University or design studio to push the technological and innovation boundaries for NFT exhibits. Such an exhibit would form a model for other NFT presentations with in gallery and museum venues.

The exhibit could be presented as a physical museum or gallery setting as well as virtually in an online gallery.

A museum or gallery exhibit produced while there is much interest in NFTs, might generate significant national media attention.