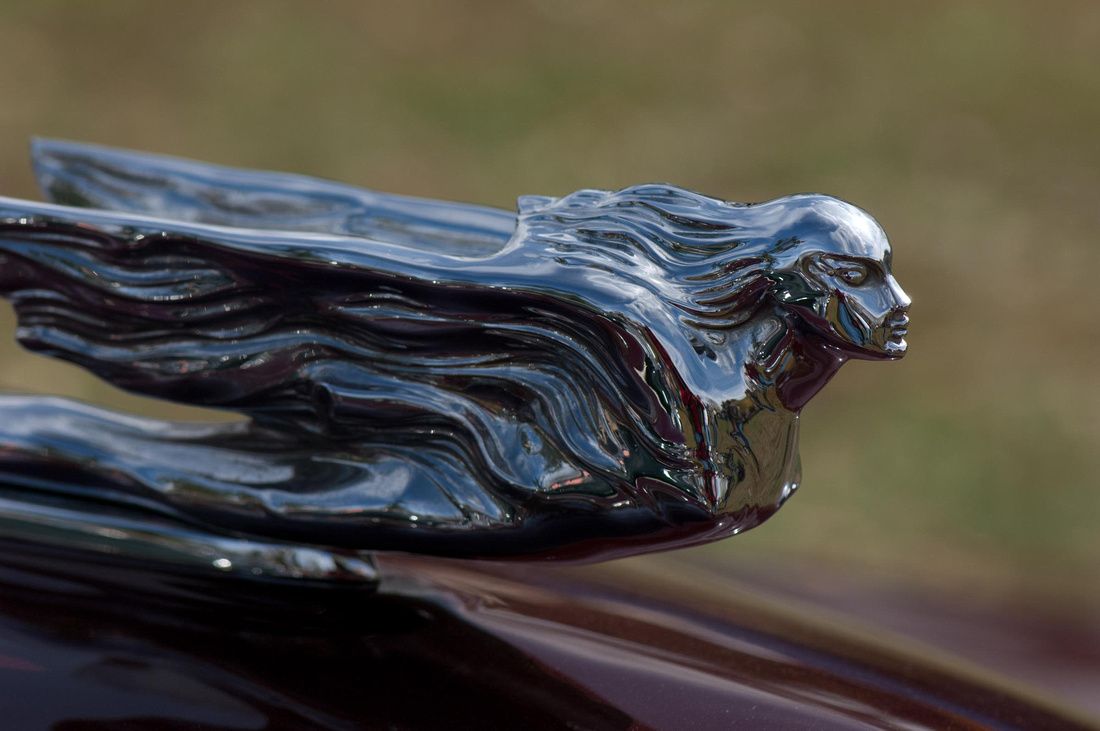 In the 1920's and 1930's, people enjoyed the excitement of a new love affair with the automobile. During this period, cars displayed mascots or hood ornaments on the hoods of their vehicles. These mascots were works of art that made a personal statement to the world about the car's owner. One of the most famous hood ornaments was the Rolls Royce "Spirit of Ecstasy" designed by Charles Sykes in 1911. The popularity of Hood Ornaments continued through the 1940's with ever more diverse creations being added. A variety of gods, goddesses, indians, birds, greyhounds, lions, elephants, maidens, airplanes, rockets and other winged icons added a personal touch  to the cars they adorned. Car manufacturers added their own line of hood ornaments as an essential component of their branding and marketing initiatives. The Streamlining Design Movement was also an expression of Art Deco that had its origins prior to WWI and grew to influence the design of buildings, furniture, jewelry, fashion, cars, movie theatres, trains, ocean liners, and everyday objects such as radios, cameras, appliances and vacuum cleaners.

You may view examples of Streamlining and Art Deco on Pinterest by clicking here.

Classic automobiles of this period frequently hosted hood ornaments that reflected qualities of the Streamlining Design Movement. One of the most common themes was the winged goddess or flying ladies which were often presented as a very sensual reflection of the female form flying in the air and or leaning into the wind. The winged goddesses symbolized, speed, delight, efficiency, power and beauty. The winged goddesses of these classic automobiles were also part of the genre of carved female mast heads mounted on the bow of sailing ships and would again appear on the nose art of B-17s and B-24 bombers of the Second World War. Similar goddess and maiden imagery is also found in European cemetery art in the classic cemeteries of Milan, Paris, Genova and Moscow. See the Northstar Gallery Series on Flesh & Stone. The beautiful maidens and goddesses of this art form served as as symbolic escorts or as a talisman during periods of transition, uncertainty and danger.

As the Great Depression approached, styles began to shift. Opulence and excess seemed unnecessary and designers began to look toward function and efficiency. As the world  entered the machine age, designs took an on industrial form that was seen in everything from cars to trains to commercial and residential buildings. Streamline Moderne style emphasized horizontal and curved lines that reflected the essence of "streamlining". Architectural design began to adopt the aerodynamic aesthetic as well. The movement took cues from the Bauhaus and International Styles. 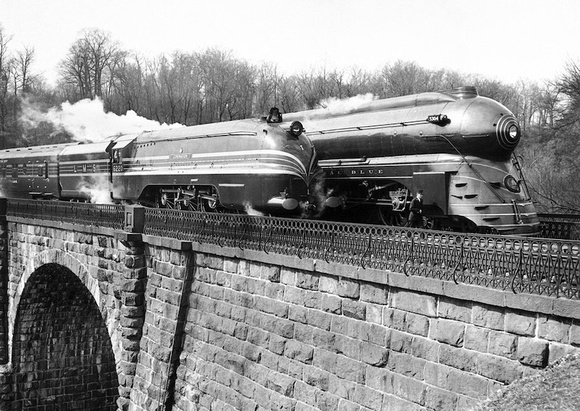 The Streamlining Design Movement was based on the notion of evolutionary progress accomplished through the reduction of “parasitic drag.” By bringing all elements of their designs into line with a streamline curve, designers minimized the imperfections and eddies that would physically retard the forward thrust of progress. Streamlining design was critical to winning the Second World War. The Allies achievement of air superiority over Europe was critical to the war effort. During the war fighter and bomber aircraft were continuously improved resulting in dramatic increases in air speed, distance, maneuverability and altitude. The global eugenics movement shared values with streamlining and promoted the vision of increasing the reproduction of valued individuals and their families and the reduced reproduction of individuals and families that were perceived as being burdens to society. Like streamlining eugenics promoted the elimination of drag in society created by people who were perceived as consuming more than they contributed. This included individuals who were disabled, criminals, paupers, indigent, individuals who were addicted, or individuals of certain races. The American Eugenics Movement advanced the vision of a national policy that would require the issue a pedigree for all American citizens as a means of controlling reproduction. It was common to be able to go to the eugenics exhibit at state fairs and as a young couple get a genetics assessment with a determination that you were fit or not fit for reproduction. Streamlining and eugenics had wide-spread support in American society which saw advancing technology and active management of reproduction as the solution to almost all of societies social ills. Eugenics emerged as a global movement and ultimately manifested itself in the horrors of Nazi Germany.

The following photo from the 1930s shows the award of the Fitter Family Award at the State Fair. 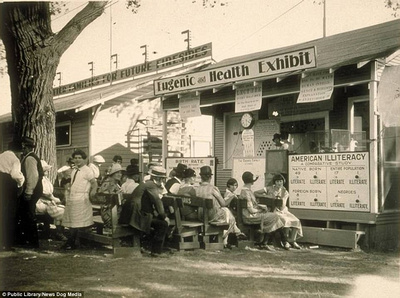 During this time automobile body design also began to reduce aero drag resulting in the creation of exquisite examples of automobile design. 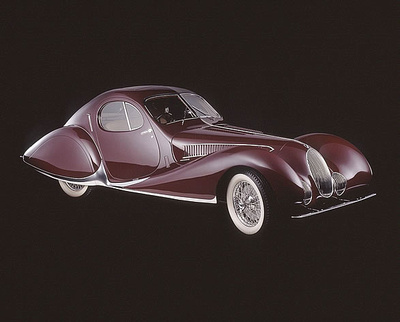 Below are several excellent examples of streamlining from the Northstar Gallery Flying Ladies Series. 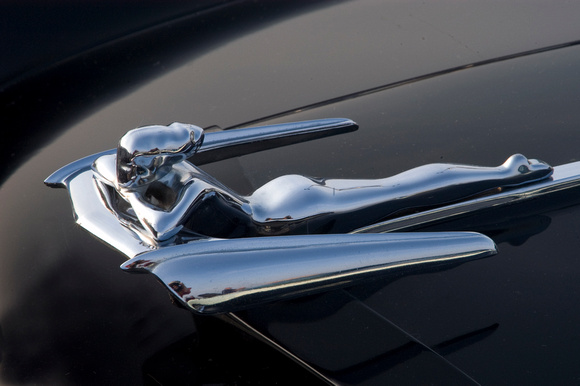 Streamling Hood Ornament - 1955 RamblerThis streamlining hood ornament is from a 1955 Rambler Custom Farina body. This is from the artist series Flying Ladies that explores the exquisite design elements and beauty of classic automobiles and their mascots and hood ornaments. Photography by Dennis W. Felty Northstar Gallery 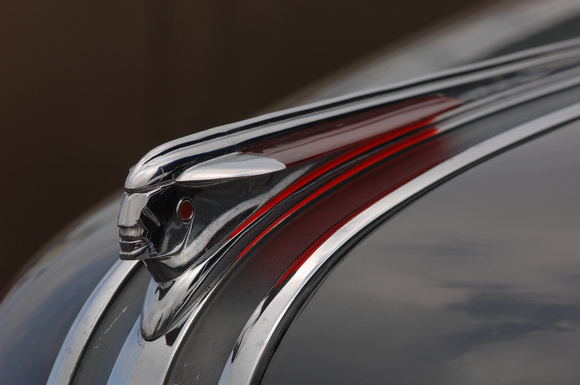 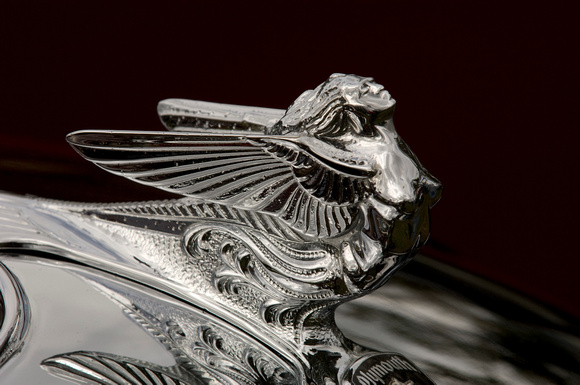 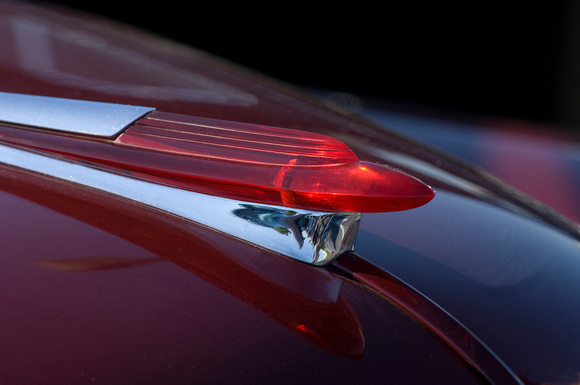 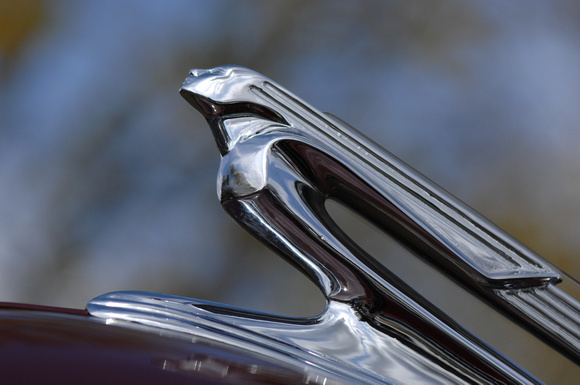