Stone Spirit #122Fine art photography exploring the beauty of the micro world and the common design elements in form, color and structure throughout creation. Stone Spirit #109 is an artistic expression of Anima Mundi or Soul of the World.

Today I received Manette Gerstle book Beyond Suiseki. The book presents a set of exquisite examples of Suiseki stone art. Suiseki are small naturally occurring rocks which are appreciated for their aesthetic or decorative value. They are similar to Chinese scholar's rocks. They may also be referred to a Spirit Stones, Viewing Stones or Gongshi. Chinese scholars' rocks, referred to as Gongshi, influenced the development of Suiseki in Japan.[2] The history of Suiseki begins during the reign of Empress Suikowhere when small stone objects were brought to Japan as gifts from the Chinese Imperial court.[3]

Suiseki stones are found in nature; they are usually expressive stones that have an exquisite shape, color and or texture. There is often a distinction made between landscape and object stones. The former reflects landscapes such as mountains, lakes or rivers, while the second resembles animals, human forms or sculptures.

The stones are typically found in rivers, caves, oceans and karst areas. They are usually not reshaped, however the cutting of stones to form a flat base is usually permitted. 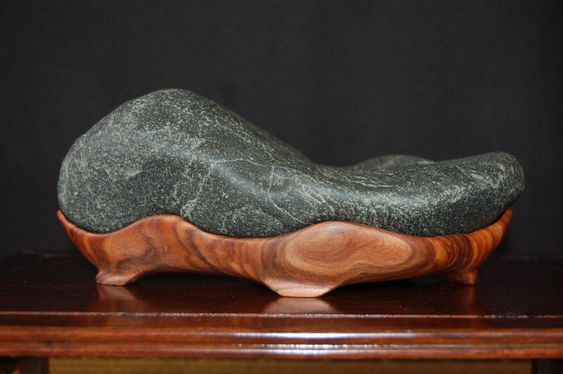 The classification and quality of Suiseki considers; shape, markings, form, texture and subtlety of color.

The following image from the Northstar Gallery is of a Sikhote meteorite from Russia. This artist suggests that it expresses many of the elements found within the Suiseki art form. In the eighth century in China, paintings of fantastic rocks began to appear in a manner where elegant rock specimens, were frequently combined with an ornamental tree or flower suggesting a garden setting.

By the seventeenth century, the aesthetic ideals of painting and scholars' rocks were almost indistinguishable. Assemblages of fantastic rocks in a garden, often arrayed in front of a white wall, might be inspired by compositional formulas developed in painted landscapes; conversely, the texturing and fantastic forms of painted landscapes often resembled those of scholars' rocks more than actual scenery. The passion for fantastic rocks culminated at this time with numerous "portraits" of actual and imagined specimens.

With the rise of monumental landscape painting in the tenth and eleventh centuries, artists created images of mountains that recalled twisting plumes of smoke, upthrust spearheads, cumulo-nimbus clouds, or the triangular form of the ancient pictograph for mountain. These form-types were not only presented in later landscape paintings, but also influenced scholars' taste in rocks. Scholars' rocks would frequently reflect the landscape formations depicted in the paintings.

The question arises, is it possible that fine art photography can be a contemporary expression of Suiseki and or spirit stones?

Robert D. Mowry, Harvard Art Museum’s Curator Emeritus, describes scholars' rocks as favored stones that the Chinese literati displayed in the rarefied atmosphere of their studios’. The Chinese scholar drew inspiration from the natural world; he did not go out into nature to paint or compose poetry, explains Christie’s specialist Pola Antebi. Rather, he worked within the seclusion of his studio and used these ‘representations of mountains’ as inspiration for his work.

“It is not a silly thing at all to enjoy a stone in a tray. I see the whole world in a tiny stone. Some objects in this world are huge, and others are small, and they come in all shapes, but they are not that different when you look at their essence”.

"Like a landscape painting, the rock represented a microcosm of the universe on which the scholar could look for inspiration," says Mowry., ‘Although most scholar’s rocks suggest mountain landscapes, these abstract forms may recall a variety of images, such as dragons, phoenixes, blossoming plants and even human figures.

A few of the mountainscapes may recall specific peaks but most represent imaginary mountains such as the isles of the immortals believed to rise in the eastern sea. However, more than anything it was the abstract qualities that appealed to the Chinese literati, an idea that resonates with the modern collector who will see parallels with the avant-garde forms of Brancusi, Moore and Giacometti.

While rocks in the West are usually cherished for their rarity, size, and color, “Easterners say that scholars’ stones share a telepathic connection with human souls,” writes Hu. Learning to see soulful qualities in these nonliving objects by understanding their long-running importance in Chinese culture is one of the pleasures found in Singer’s book.

Shipu is an additional perspective on stone art. In Thomas S. Elias’s history, Shipu are books of description, poetry, or art dedicated to stones. The first was published between 300 b.c. and a.d. 100, as part of an encyclopedia of facts about the known world. Elegant and informative. Megalithic standing stones and stone circles such as Stonehenge were erected between 10,000 to 5,000 years before present time and are found across Great Britain, Scotland, Ireland and much of Europe. They are believed to be sites of ritual practice. Similarly, Manitou is the American Indians' belief  that the spirit of creation is manifest in stones, rocks, rivers, mountains, rain and most other forms of nature. Megalithic standing stones and Manitou are parallel motifs to Spirit Stones where stones are also considered to have q spiritual component and or to reflect the totality of all of creation.

Unique stones have played an important role in early human cultures. Lower Paleolithic Acheulean tool users, according to Robert G. Bednarik, began to engage in symbolic behavior such as art around 850,000 BP. There is evidence that they decorated themselves with beads and collected exotic stones for aesthetic, rather than utilitarian qualities. According to Bednarik, traces of the pigment ochre from late Lower Paleolithic Acheulean archaeological sites suggests that Acheulean societies, like later Upper Paleolithic societies, collected and used ochre to create rock art. "The spectacular lions and rhinos of Chauvet Cave, in southeastern France, are commonly thought to be around 30,000 to 32,000 years old, and mammoth-ivory figurines found in Germany correspond to roughly the same time. Representational pictures or sculptures don’t appear elsewhere until thousands of years afterward. So it has long been assumed that sophisticated abstract thinking, perhaps unlocked by a lucky genetic mutation, emerged in Europe shortly after modern humans arrived there about 40,000 years ago. Once Europeans started to paint and think symbolically, their new skills, and their human genius, must have then spread around the world."

Smith proposes that spiritual beliefs drove the very first art. He cites Rhino Cave in Botswana, where archaeologists have found that 65,000 to 70,000 years ago people sacrificed carefully made spearheads by burning or smashing them in front of a large rock panel carved with hundreds of circular holes. “We can be sure that in instances like that, they believed in some sort of spiritual force,” says Smith. “And they believed that art, and ritual in relation to art, could affect those spiritual forces for their own benefit. They’re not just doing it to create pretty pictures. They’re doing it because they’re communicating with the spirits of the land.”

Early rock paintings are examples of early humans modifying rocks and rock surfaces for esthetic or spiritual purposes. Additional evidence of stones having a spiritual element can be found in the early Neolithic period, 7,000 years ago, where highly prized stones and jade have been found buried in tombs. Stone projectile points dating back 64,000 years have been excavated from layers of ancient sediment in Sibudu Cave, South Africa. The exquisite attention to beautiful form and design of ancient points suggest a deeper significance beyond functionality as a tool and may share the spiritual connotations of other stone expressions. Below is an arrowhead from Northstar Gallery Arrowhead Series. Here arrowheads are presented as missiles that have traveled across time and space with a message for current times. It is most interesting to consider that when we view, touch or hold a stone that we find unique and admire its beauty and consider its greater meaning we are sharing a common experience with our first human ancestors and are celebrating the dawn of human consciousness. The emergence of consciousness was essential for the development of the fundamental qualities of the human experience to include the perception of beauty, an awareness of the past, an awareness of the future, an ability to plan, remembrance of past events, awareness of death and a perception of spiritual and religious experiences. Stone Spriit #125Stone Spirit #125 explores the exquisite beauty of the micro world and the common design elements found throughout creation. Stone Spirits is an intimate expression of Anima Mundi or Soul of the World as well as the ancient stone arts of Suseiki and Gongshi.
Photography by Dennis W. Felty Northstar Gallery.

Northstar Galleries “Stone Spirits” photographs are a contemporary expression of Spirit Stones. Additionally it should be noted that Japanese Suiseki has a rich history of including paintings and other two-dimensional pictorials where it was common for paintings to reflect viewing stones and for viewing stones to reflect paintings. What is unique about Northstar Gallery “Stone Spirits” is they only exist in the micro world and can only be experienced when viewed with the aid of a microscope and or camera. Northstar Galleries' Stone Spirits, like Scholar’s Stones are populated with dragons, monsters, devils, angels, animals, priests, birds, faces and human forms. The Stone Spirit images are enlarged from several hundred to several thousand times. The subject stones are typically 2 to 4 centimeters in diameter and often have a clear crystalline substrate that creates a three dimensional effect.

The Stone Spirit images express many of the themes of Suiseki such as transformation, renewal, enduring presence, chaos, power, universality and beauty. I would be greatly interested in peoples’ opinion as to whether “Stone Spirits” are a contemporary form of Viewing Stones, Suiseki, Spirit Stones or Gongshi.