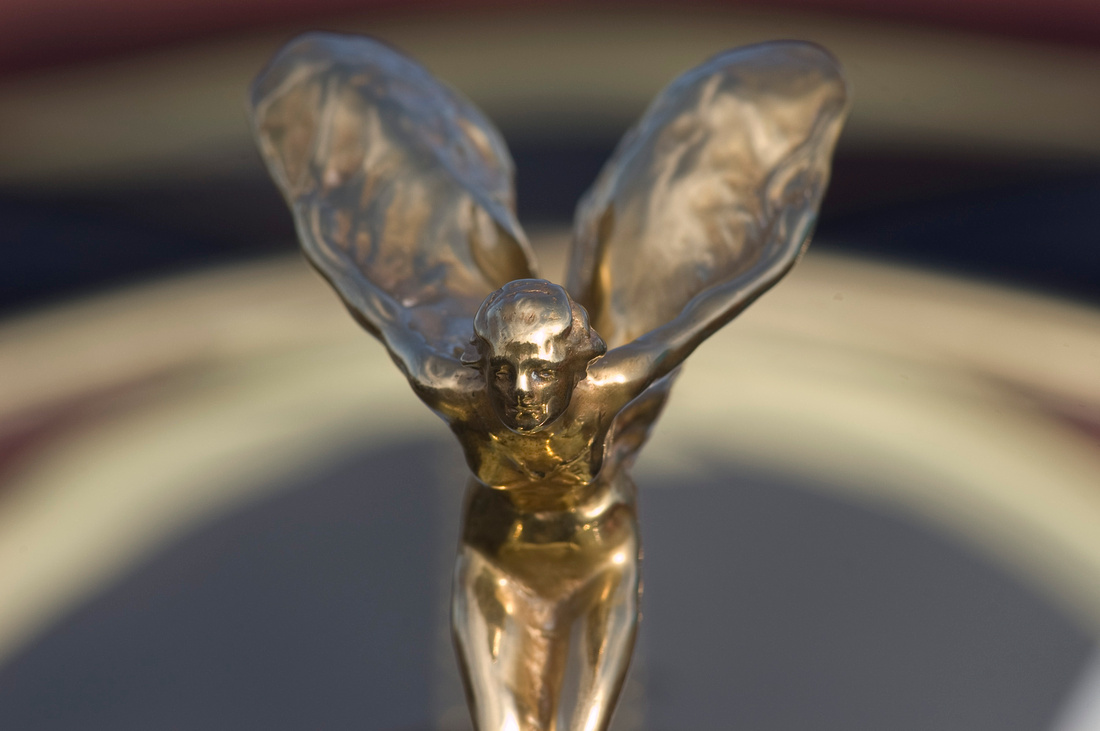 The story of the Spirit of Ecstasy is shrouded in the gossip columns of London high society. It entails aristocrats, high society, benefactors, a beautiful woman, a secret affair and an enduring celebration of wealth, speed, power and success.

The Spirit of Ecstasy appears on the bonnet of Rolls Royce motor cars. Lord Montagu of Beaulieu was a pioneer in the automobile industry, and was also editor of The Car Illustrated magazine from 1902. Lord Montagu approached his friend, the sculptor Charles Robinson Sykes about creating a hood ornament that would be befitting his Rolls Royce. Sykes created an initial version of the figure as a woman standing on one foot, with her gown flowing behind her, holding one finger to her lips as if keeping a secret.

The model for the figure was Eleanor Velasco Thornton often know as Thorn. Only a few castings were made around 1911 and few survive. Thornton was secretary to Montagu and, as gossip would have it, his mistress as well. The figure made by Sykes was called The Whisper. 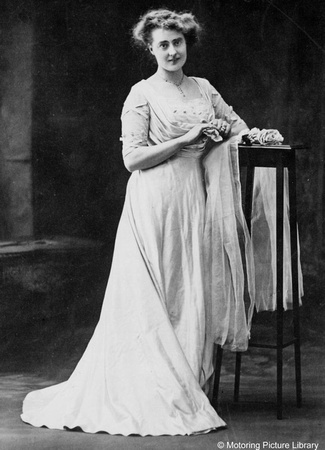 Eleanor Velasco Began to work for Lord Montagu as his secretary in 1902. Lord Montagu fell in love with her and their love affair was to remain hidden, limited to a close circle of friends, for more than a decade. Secrecy was required because of Eleanor's lower social and economic status and Montagu was already married to Lady Cecil Victoria Constance Kerr.

By 1910 personal automotive mascots had become the fashion of the day. Henry Royce, the founder of Rolls Royce in 1904, was concerned that some owners were mounting "inappropriate" ornaments to their cars. Claude Johnson, managing director of Rolls-Royce Motor Cars, was tasked to commission a dignified and graceful mascot for use on all Rolls Royce motor cars.

Johnson turned to Sykes to produce a mascot which would be used on all future Rolls-Royce motor cars and become generic to the marque, with the specifications that it should convey "the spirit of the Rolls-Royce”, namely, speed, silence, absence of vibration, the mysterious harnessing of great energy and a beautiful living organism of superb grace"2

Sykes' direction from Claude Johnson had been to evoke the spirit of mythical beauty, such as Nike, whose graceful image resided in The Louvre, but Sykes was not convinced, he felt that a more feminine representation was needed.

Johnson had in mind the ‘Winged Victory of Samothrace’ statue in the Louvre. Winged Victory (or Nike) is the goddess of strength, speed, and victory and is often seen with extended wings.

It was Miss Thornton whom Sykes had in mind as the model for the project. Sykes chose to modify The Whisper into a version similar to today's Spirit of Ecstasy. He called this first model The Spirit of Speed.3 Later, Charles Sykes called it "A graceful little goddess". The Spirit of Ecstasy was ultimately selected for her name and road travel as her supreme delight, alighted on the prow of every Rolls-Royce motor car to revel in the freshness of the air and the musical sound of her fluttering draperies."

Claude Johnson devised the description of the Spirit of Ecstasy, he described how Sykes had sought to convey the image of "the spirit of ecstasy......she is expressing her keen delight, with her arms outstretched and her sight fixed upon the distance."

Henry Royce was ill during the commissioning of the Spirit of Ecstasy. He did not believe the figurine enhanced the cars, asserting that it impaired the driver's view, and he was rarely seen driving one of his company's vehicles adorned with the mascot.

The figure has had many variations in, names and sizes, from ‘The Whisper’ to ‘The Spirit of Speed’, to its current name of ‘Spirit of Ecstasy’ and is often known as Emily, Silver Lady and Flying Lady. Kneeling versions were introduced for smaller sports cars and the current version has a robust defense mechanism. If any pressure is applied to the ornament, the car recognises what is happening and immediately retracts the figure into the bonnet.

The Spirit of Ecstasy was originally silver-plated, however the mascot was changed to a nickel & chrome alloy after 1914 in order to discourage theft. Today’s models have been digitally sculpted to resemble Eleanor Velasco Thornton and are hand-cast using the lost-wax process. Today the Spirit of Ecstasy can be stainless steel, 24-carat gold, illuminated frosted crystal, or even matte black and studded with diamonds.

Eleanor died on 30 December 1915 when the SS Persia was torpedoed by a U-boat south of Crete. She had been accompanying Lord Montagu who had been directed to assume a command in India. He was thought to have been killed too, but survived and was saved after several days adrift in a life raft.

The Spirit of Ecstasy – Edwardian Promenade