Henry Ford purchased the Lincoln Car Company in 1922 during its bankruptcy. Ford’s son Edsel commissioned the design for the Lincoln greyhound hood ornament in 1927 wanting to associate the Greyhound's speed with the company’s vehicles. The greyhound hood ornament was created using the lost wax method similar to that used on the Rolls-Royce Spirit of Ecstasy. Gorham Manufacturing Company, a silversmithing firm based in New York City, designed the hood ornament that was mounted on Lincoln automobiles through the 1930s. Later Lincoln switched to a coat-of-arms and knight’s helmet design for its hood ornament. Ford then adopted the Greyhound featuring it on vehicles like the Model 48 and DeLuxe Four Door until 1936. The hood ornament’s styling was clearly inspirational to both Dodge and Jaguar who created similar bounding animal ornaments in the years that followed.

The Greyhound is an excellent example of the Streamlining Design Movement that was applied to cars, airplanes, trains, ships and consumer products during the 1930s and 1940s. Streamlining's core concept is that by reducing drag, cars and airplanes could go faster and further by being more efficient. During this time rockets, airplanes, winged goddesses, began appearing as hood ornaments. The Streamlining Design movement encompassed car design as evidenced by the proliferation of fins on cars in the 1950s. 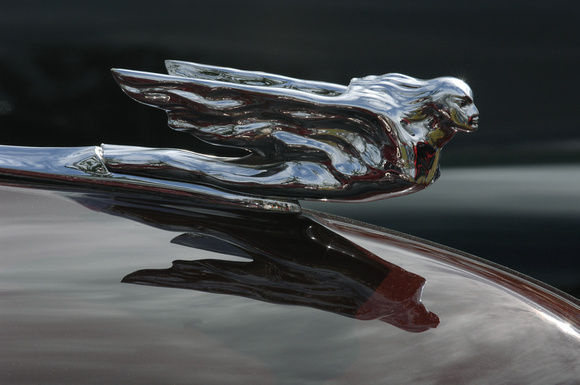 A winged Goddess hood ornament on a 1942 Cadillac Series 62 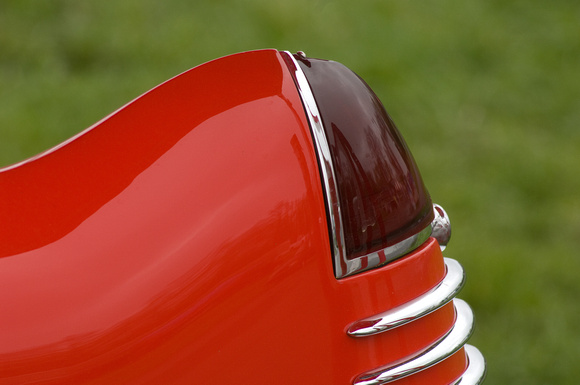 Tail fin as the last phase of the Streamlining Design Movement